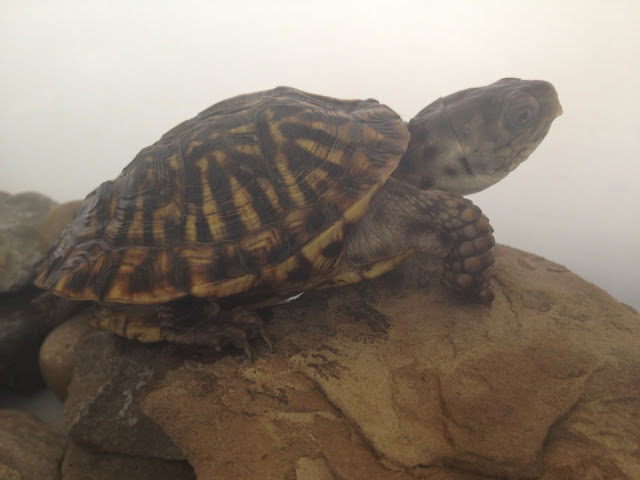 A few weeks ago I wrote about Simba, our family’s new addition. I’m happy to report he’s getting so plump and is always so happy! He loves to eat, play, and chill with all of us. We couldn’t imagine our lives without our kitty and we just love him to pieces.

As my dad was walking our doggies this morning, he suddenly came across Little Turtle (or LT, for short) who was hanging out on a sidewalk near our home.

Now if I said that we weren’t cat people even though we ended up rescuing Simba, then I don’t know what to say for how we stand on turtles. Sure, they’re cute… But that may be about it.

But back to Little Turtle and our “Finding him a perfect home” saga.
Attempt #1: Our own home. As soon as my dad brought LT home, I got on the Internet and researched stuff about turtles as pets. Turns out turtles are harder to care for than, say, dogs or even cats (or even fish)–like a lot! We then decided we wouldn’t be able to properly take care for him, which was bittersweet, but nevertheless for the best. (I’m not one that easily passes up the chance to care for an animal BUT with two dogs, a cat, and a fish [who has its own tank w/temp. controls and everything], we’re a bit tied up.)
Attempt #2: Pet**. So my dad took him to Pet** ready to have those guys find LT a better home than we could provide him. Because we had never  handled a turtle before, he ended up transporting LT in our fishy’s little carrier. When he came back, though, he told me LT was actually aquatic and that he hadn’t brought back the carrier because “they [the Pet** people] didn’t have where to put him.” That’s weird, I thought… Five minutes and a little short cry about how unfair it was that they treated animals so poorly by not finding him even a good temporary place, I decided we ought to “rescue” him. Again. (Though this time, it wasn’t from the dangers of being alone on a sidewalk, but rather from a bunch of professional wanna-bes who really had no clue about pets.)
So we went back to find LT still in that same carrier with 3/4 in. of water. Keep in mind at this stage the Pet** guys had told us LT was “aquatic” which explains the pool of water they had forced him to remain in…
Attempt #3: Our home again. Clearly someone out there must be in need of and be better able to care for a pet turtle, right? So I posted an announcement on FB and an ad on KSL while I looked for alternatives to Pet** where we’d know LT’d be safe and able to find another loving family. Then I called Petsm*** and a very nice guy said the store wasn’t authorized to sell turtles one donated (I think that was his reason?) so he referred me to another local pet store. I called them and the gal who answered was soo nice over the phone! I felt an immediate sense of relief and giddiness take over me. Finally, LT looks like he’ll have a great life after all, I thought :)
Attempt #4: P&S. What an awesome store! Contact me directly if you’d like the full name/location (I don’t want to make it seem like I’m advertising, after all…) Everyone there was soo nice and welcoming! When we arrived, the gal I had talked to on the phone said to us, “Turtle?” and then she and her coworker instantly came by, picked LT up and couldn’t stop gushing about cute and perfect he was. They then explained that although he was aquatic, he preferred land… Go figure!
Long story short:

In the end, LT was sooo happy, he could NOT stop exploring! Aww!


Oh and take a look at his new home: Remember how Pet** had carelessly put him in water (even though he’s not that “aquatic)? Ugh… Well the ladies told us that b/c he was still small (his shell’s about 2-3″ in diam.) they couldn’t sell him yet; instead they were going to keep him in this cute little perfectly lit, temp-controlled, and UVB-UVA-regulated cubby habitat until he was big enough to hang out with his other little turtle buddies in a bigger place.


Turtles make great pets, by the way. (If you’re looking to get one, think about LT –when he grows of course). Cared for properly, they’re practically low-maintenance.


So there’s lazy, heartless employees who give popular pet stores a bad name and then there’s hard-working, enthusiastic and knowledgeable pet store employees who immediately leave  a lasting impression. Pet** has always been and will continue to forever be a no-go place for us (we go to The D’s M on 33rd So anyways, which we love–it’s more for dogs and cats), while this new P&S has definitely become a new go-to for whatever else we need (or at least to check on LT!)…


(As a little aside, my mom, who’s been visiting family in Colombia for the past few days, recently told us about a couple stray dogs she’s seen and how they brought her to tears… She says we’ll even need a truck to rescue them all when we visit! : ) Yup, that’s how much we love animals.)

« Your Pocket Change Is None of My Business
Arequipe: A Colombian Staple »