You are here: Home / LIFE / MEMORIES / "Eww. Please refrain from more posts like this." 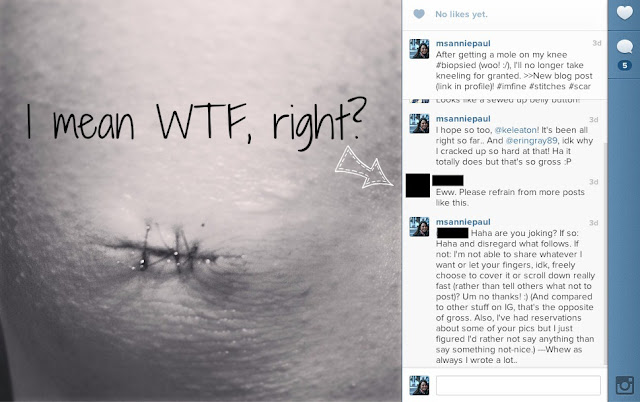 The quote above comes from a “friend” of mine who I haven’t talked to since she made the mistake of posting something that, regardless of free speech, really didn’t belong and was rather uncalled for. Here’s that image on IG (Follow me!!), btw.

The following, which a new bloggy friend of mine said she loved, was my response to her (in case you can’t read it on that image):

Haha are you joking? If so: … disregard what follows. If not: I’m not able to share whatever I want or let your fingers, idk, freely choose to cover it or scroll down really fast (rather than tell others what not to post)? Um no thanks! :)

(And compared to other stuff on IG, that’s the opposite of gross. Also, I’ve had reservations about some of your pics but I just figured I’d rather not say anything than say something not-nice.) …

But that still doesn’t mean I can’t vent about it! I mean, it really bothered me that she posted that because I simply don’t get what possessed her to, I don’t know, NOT post something more civilized. Another new bloggy friend commented, “I hope it heals quickly” and the one after her jokingly compared it to a “sewed up belly button.”

So why couldn’t my friend of several years (who’s actually my age but acted as though she was 12 right there) share instead some words of encouragement?

That’s right, dear friend of mine who could have cared less about what’s really important: IT COULD HAVE BEEN CANCER. And that, I’m sure, would have been less appealing to your eyes, but you wouldn’t have cared either way, right?

So I’m sorry you made that comment and that you haven’t had the guts/time/desire to apologize since then. I’m sorry because it’s your loss, really.

[Ah, sometimes a good ole’ venting session with y’all sure replenishes my spirit.]

Have YOU recently vented to someone or lost a friend over something?

« I Don’t Take Writing For Granted Anymore: I Overcame Dystonia
The One Where I Talk About Learning English »