HOLA again! 1) For my latest, add my RSS feed to your favorite reader! 2) This post may contain affiliate links. 3) Any info you share IS safe with me. XO.

[This edition brought to you by the lovely “fashionistas” at Harper’s Bazaar who drool over practically anything expensive any designer puts out. My experience with this magazine in particular has taught me that if I haven’t chuckled at at least one of the crazy weird/inaccessible/expensive things it features, I haven’t actually given it the attention it deserves.]

In a nutshell, I know I don’t work at a fashion magazine because all of my “trying too hard” colleagues and fashion designers I’m supposed to be raving about would hate me. Because all they do is try too hard to please God-knows-who. And all I’d do is make snarky comments about the things I’m supposed to fall head-over-heels for. 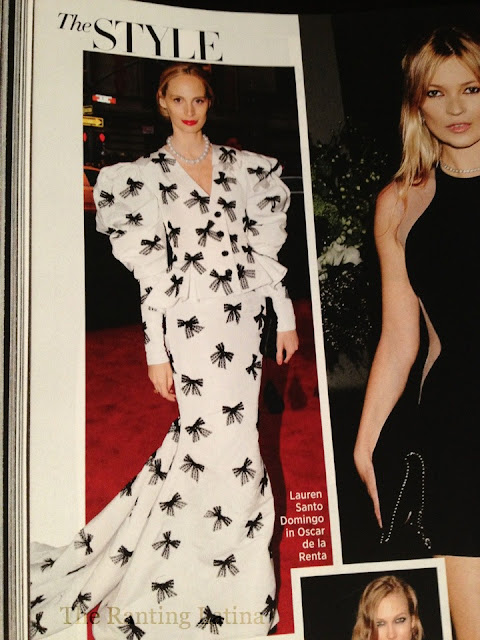 I’m sure Lauren Santo is a nice lady. But even she looks uncomfortable in this clowny Oscar number. OdlR is one hell of a “motherchucking” talented designer BUT could he have made a sillier “dress”? Ugh the bows, the SLEEVES, the peplum, the TRAIN… I really don’t get that couturey mess. Must. get. out. NOW. 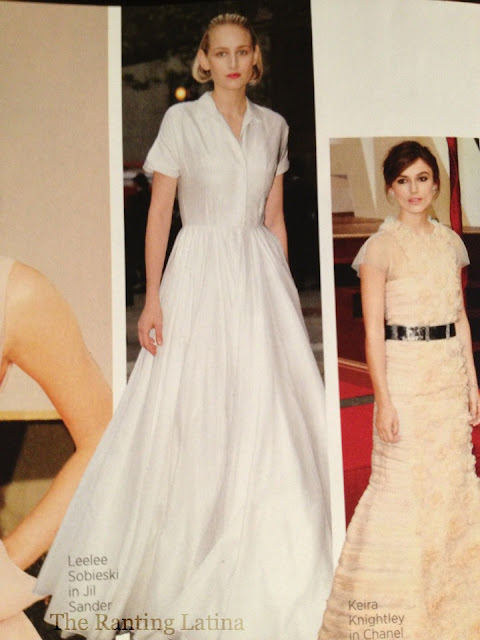 Poor Leelee. Remember her from the creepily awesome House of Glass and that other movie where she played the dying girl who was also Josh Hartnett’s girlfriend? I’m sure she’s been in other things since then (those were from like over a decade ago!) but I don’t remember…

In any case, in the unfortunate shot above, she looks like a sad maid** who got caught playing dress-up with her boss’s gown. It even appears as though she wasn’t a fan of the sleeved-button-down-ballgown atrocity pictured here (sorry, Raf Simons/Jill Sander), which is not only frugly, but would also look ridiculous on a real woman.

**Why a “maid”? B/c in Colombia (much like anywhere else maids want to look nice while on the job), maids wear shirt-dresses.

Simply trying to hard. (Or in this case, perhaps not nearly enough?) 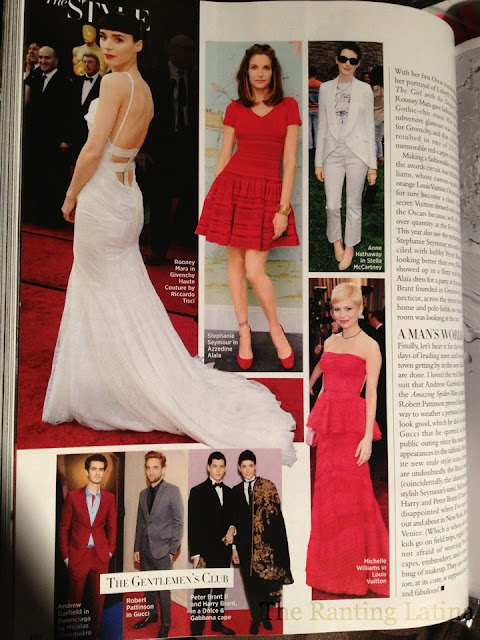 Oh dear… WHERE to begin with this page??!! Let’s do it the old-fashioned way and round them up clockwise from top left:

– Rooney Mara (anyone else not digging the weird DIY-like, bowl-shaped bangs.. or is it just me?): Kind of pretty on the front (can’t tell from that oh-so predictable “butt angle”), but the bondage/S&M/surgery-band-type straps at the back don’t make sense.

-Stephanie Seymour: If you were to cut out her head from this picture, you’d have the right look– for a teen starlet. (Think Miley Cyrus before she got all weird.) But add the face back in and you think, “Why the EFF is a lady her age wearing a teen starlet’s outfit AND even posing like one?” Wait, that’s not what you thought? Well, that what I thought. Because seriously, the anything-but-por poor lady is trying too dang hard to please someone.

But apparently having one’s mom (she’s the mother of the two Superman-“Lord Disicks” pictured below) try to look like a “sexy provocateur” is in. Yuck. I’m talking to you, too, Alex Bensimon!

– Anne Hathaway: Where, oh where, is the appeal in trying to look like a man? And since WHEN is being and looking like a woman NOT enough? Yes, Anne Hathaway is a beautiful and talented actress with perhaps misplaced priorities (come on girl, the Occupy movement? Have you got NOTHING else more productive to get involved in?) but men-looking suits (even if they’re by Stella McC) don’t suit her (pun intended)– can’t she see that this one’s totally eating her alive? Those shoes are gorg, though…

– Michele Williams: That dress is just absolute perfection and I want to borrow it.

– The Brant kids: Henry VIII called and wants his cape back. He also said that if you wouldn’t return it to him, then you should at least give it to Scott Disick–he’s older and can rock it without ridiculing (ok, maybe a little bit) himself as much. Sure, (one? of) you may be attracted to other men, but that doesn’t mean those other men want to date someone who looks like a pretentious king-wannabe. Take a page from Rob Pattinson’s handbook (but NOT from Andrew Garfield’s!) and dress less costumey. Speaking of…

– Rob Pattinson: Sure, he sometimes looks comical in some of his other getups, but this suit just treats. him. right. I may not like the guy per se (though he’s a formidable actor) but this suit makes it hard for me not to feel just a tad attracted to him. He looks so dashing.

In short, everyone on this page (except for Ms. Williams and Mr. Pattison) is simply trying. too. hard.

~ ~ ~
Honestly, “fashion” and “couture” nowadays is, to me, soooo laughable that it really can’t be taken seriously. These people should try not harder, but better. That, and fire their stylists.

[P.S. I wasn’t trying to purposefully put anyone down, as we women need nothing but respect towards one another. But I mean COME ON! These getups are just begging some light-hearted commentary!]


As you can see, this was my first (but certainly NOT last!) “Why I Don’t Work In A Fashion Magazine” post. Fortunately for me, I subscribe to Bazzar so I should have plenty of never-ending ammunition for future posts. Wee!

All images taken with my phone from the December issue of Harper’s Bazaar.

« Do you have HIPSTER? Then Unpretentiousil Might Be For You!
Schick Happens: A Shick Hydro Silk Review (Spon) »

A couple weeks ago I shared reactions to the pande

"YouTube Moms" are selfish >> See why on the blog

Many women around the world are exasperated by how

“Role Models” don’t put their kids after the

Here I go over European misconceptions about Ameri

Here's how YOU can help prevent the spread of #Cor